Having invested time, effort and money on two previous systems which proved unsuccessful, Jane Vincent, Director of Fortem People, decided to look for independent, external support to help her find the right CRM.

We asked Jane about what she learned on her journey, and also interviewed Sarah, the consultant who Jane brought in to help her. If you want to hear more you can listen to podcast or watch a longer video below (Please note that Sarah is an independent consultant and not affiliated with Be the Business)

We're on a third CRM system, and that has taken up a lot of time and money, but I think we've got it right this time. We needed something quite basic and we were getting sold a big tool that was for big organisations

Jane knows that she needs technology to help her business grow and flourish. For her CRM she wanted something that saved her team time and increased efficiency. This meant it had to integrate with her other tools. In the past she has found that systems which are not integrated can actually create more work. Another key factor for Jane was finding something which could enable the culture she was trying to build, for example by allowing people to work flexibly. Sarah encouraged Jane to see technology as a fundamental part of her business which enabled her to achieve her objectives, not a bolt on.

By staying true to these objectives throughout the process, Jane has finally found a solution which works for her and her team.

It's been quite hard because you're trying to run a business, you're trying to make money, but then at the same time look at technology. There's never enough time to do that stuff but it's so important because ultimately if you do get it right, it's going to improve process and speed up what you do. So you have to take a step back

Jane has found herself oversold to in the past, so for this package she pushed herself to ask "so what" when being pitched fancy features by salespeople. A tight focus on how a piece of software can actually deliver value for the business has helped her avoid the bells and whistles she doesn't need. That's how she is now getting a return.

Jane encourages other SME leaders not to jump in as fast as she did, but also not to be scared of technology. The wrong turns she took along the way have cost her time and money but she's now found something which makes her business more efficient and which works for her people

We've spent thousands on the wrong products, if we'd have got it right first time and got somebody in to come and help us it would have been different. That amount of money to pay for someone to come in is invaluable

Jane found there were a huge number of CRM systems out there. She started by narrowing it down to just those that are designed for the recruitment industry, and then looked for something which could work for them at the size they are now, but also scale with them as they grew. Jane found that even though she has been in the industry for a long time, a lot of the systems she has used before wouldn't work for her now, because she is trying to do things differently. She needed something which could support her in that

Jane decided to get external support from Sarah to help challenge her identify what she needed, challenge her on her requirements, and help her stay true to those as she dealt with salespeople. Shes now a big advocate for reaching out for support

If you've got a CRM system that actually causes you extra work, then there's no point in having one, and that's what some of the systems that we were sold were doing

Jane has learned a lot about dealing with technology salespeople the hard way. She found herself getting promised the earth by salespeople, but found she didn't really know if it was going to work for her business until she saw it actually working. She found that it didn't really matter what the system could do, but rather whether it could do what she needed it to do for her business. She needed salespeople who could speak to her about how the software could enable the things she wanted to do, rather than those who would baffle her with technical language.

She says she's now much harder to sell to! She's now very clear about what she wants, and if it won't do that then she isn't interested

Don't just listen to the salesman, don't just look at the spec of the tech. Really think about what you do on a day to day basis

We were oversold products which just didn't work for our business...two of them

Making it work for the team

A key factor which helped Fortem find the system which worked for them was engaging the right people in the selection process. Jane made sure she listened to the people who would be using the system day to day, using a more collaborative approach to make sure the whole company was totally bought in. The systems which didn't work were too intricate and advanced. Her people didn't understand them and therefore didn't use them, meaning they just became a big waste of money

Sarah helped Jane think about the cultural shift she was trying to make. If people have been doing things one way for many years then you need their buy in if you want them to change. o that without buy in

It's got the have the whole company buy in. This time we've listened to the people who were using it on a day to day basis. That's the key

Getting your money's worth

Jane is a great example of a business leader who has really interrogated whether the tools she has put in are delivering the outcomes she needs from them. She has twice made the decision to replace a CRM system because it wasn't helping her achieve her objectives. Despite the challenges she has faced, she is still very positive about the role that technology plays in her business and how it helps her and her team succeed.

When it's in, you've then got to ask yourself the question, is it working? Did it do what I set out to do?

We have jumped in quite a bit with things like apps, which do all these wonderful things...but they don't talk to each other. So all it's doing is causing us more work. It might be on a phone, it might be an app, it might be absolutely amazing...but it's not helping with the process and saving us time

Listen to the full discussion

We continued the conversation with Sarah and Jane off-camera, talking more in-depth about the lessons they learned

Jane got to the right system by listening to the people who will actually be using the system on a day to day basis. By making the process more collaborative the team found something which really worked for their business and their way of working

Ensure any new technology works for your business and works alongside existing systems. It's easy to be won over by shiny apps with beautiful interfaces but you need to make sure they'll work for you.

Don't be seduced by endless features or bells and whistles... focus only on what you need rather than everything a proposed solution says it can do.

Don't be afraid to ask for help. Consult an independent specialist who has your interests at heart, not the solution provider's. Also, explore funding options - there are numerous grants available for technology which can help reduce your financial burden. 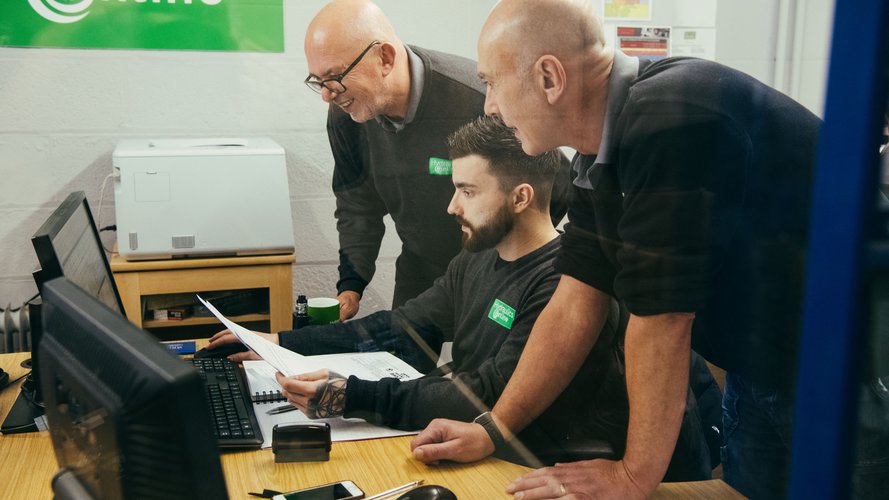 Find and implement the right software for your business

Use our six step implementation process
Read our adoption guide